Tourism and Anti-Bullying speak one language 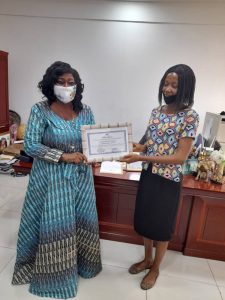 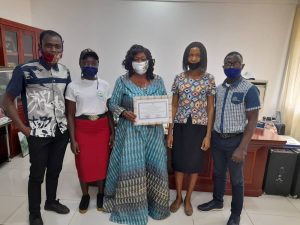 Anti-Bullying Initiative Worldwide has presented a Certificate of Appreciation to the Minister of Tourism and Cultural Affairs, Dr. Memunatu Pratt in recognition of her tireless efforts in rebranding the tourism sector and reimaging Sierra Leone globally.

Presenting the certificate to the Minister, the Media and Communications Director, Anti Bullying Initiative Worldwide, Samuel Koroma said that their organization is fighting against all forms of bullying, noting that bullying happens across the spectrum.
He stated that the Government Free Quality Education cannot thrive if the environment is not bully free, noting that as one of the reasons they have established Anti Bully schools clubs where they train kids how to identify bully incidences and prevent them.

He continued that their current drive now is to recognize people who have contributed immensely to the socio economic growth of Sierra Leone, and it is in that light that they have recognized the work of the Minister in rebranding the Tourism sector.
He commended the Minister for showcasing Sierra Leone’s cultures, values and morals to the outside world which has repositioned Sierra Leone’s image globally.

Receiving the certificate, the Minister of Tourism and Cultural Affairs, Dr. Memunatu Pratt applauded members of Anti Bullying for the initiative and stated that it is necessary for a country like Sierra Leone. She said for government, a very key form of bullying is Cyber Bullying which is a very serious violation of human rights and also a very serious factor of psycho-social violence.

She maintained that the connection between Anti-Bullying and Tourism is very huge because Anti-Bullying affects everyone and the fact that they have recognized the work of the Ministry is also a way of preventing people from bullying one another.

We have done four peaceful elections and we will soon get the 5th in 2023 as a nation, free of...

After a two day fruitful tourism business engagement by NTB's Fatmata Mida Carew and her team....

© 2023. National Tourist Board of Sierra Leone. All rights reserved.